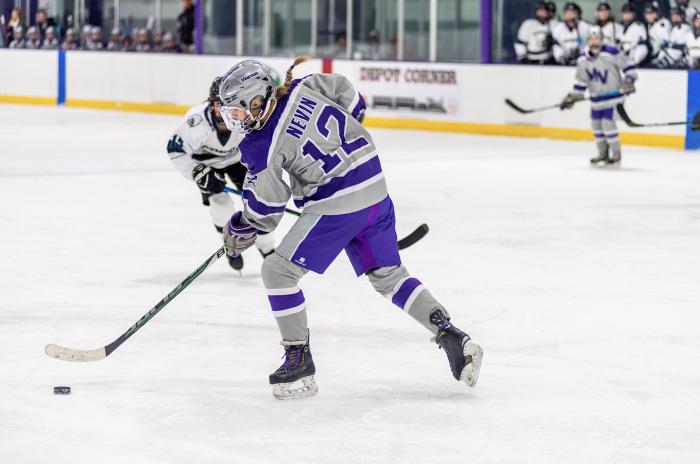 The Vineyard boys and girls high school hockey teams began the winter sports season last weekend with a flurry of scrimmages against teams from all over New England.

The defending Cape and Islands league champion boys team faced off against Lexington Friday before playing both Oyster River plus Acton-Boxborough on Saturday. Meanwhile, the girls skated against Needham on Saturday and then had a double-header on Sunday with Lincoln-Sudbury and Plymouth.

Throughout the weekend, the action was constant as the games were all competitive while showcasing the entirety of each squad’s roster. Geoghan Coogan, the girls head coach entering his second year, said, “I’ve got a good returning group, a solid core of seniors and a really exciting group of freshmen. ”

Five of the six freshmen on varsity were also salient members of the soccer team this past fall. They hope to carry the success they found on the pitch across the street to the rink.

“They’re all just solid, solid athletes and they’ve been enjoying sports together since they had been little kids, ” Coach Coogan said of their freshmen skaters. “She noticeably put in every ounce of work we asked her to do… and that’s where the game starts, when you’ve got a goalie who you can rely on back there, you’ve got something special, ” the coach said.

As the girls’ first game from the season against Old Rochester on the road Thursday nears, Trainer Coogan said the coaches have been focusing on building team chemistry and playing calm, cool and collected.

“This is the most unselfish group of hockey players I’ve been around in a long time and I think that’s what’s most exciting, they want to work together, ” he said.

Meanwhile, the boys team went without a loss over the weekend as they showcased their speed and discipline on the ice while maintaining a no-fear mentality. Against Lexington, who outsized the Vineyard, there was no shying away from contact or hesitation to make a tough play in the corner. Coach Matt Mincone, who is entering his 25th season as the Vineyard’s head coach, said their team’s play made a lasting impression on him.

“That shows character really, really early in the season, ” he said.

The Vineyarders are young this year, with as many sophomores on the roster as juniors plus seniors combined. Two freshmen, Griff Callahan and Wyatt Wiggin, also made varsity.

Coach Mincone said all of his younger skaters are solid hockey players along with strong fundamentals and high hockey IQ. Six of the 10 varsity sophomores played on varsity prep last year honing their skills under coach Max Sherman whilst staying hungry and ready to join forces with the varsity.

With the first game of the season approaching on Saturday at 4 p. m. at home towards Whitman-Hanson, Coach Mincone has confidence in his upper classmen to be leaders and promote the camaraderie necessary for a successful season.

“They’re great young men and that is contiguous, ” he said. “They work their tails off all year long to become better young men and athletes and it shows. ”

Across the parking lot from the ice rink, in the pool at the YMCA, the Vineyard swimming squads are also ramping up preparations for the time of year. Head coach Jen Passafiume said her swimmers looked good in their first week of practice and the primary focus has been getting everybody’s swimming endurance back.

“The kids we have are really strong so I’m looking forward to seeing them compete, ” she said.

The boys, that won the Cape and Islands league for the first time this past year,

First up for the team is the relay carnival this weekend at the Sandwich High School pool. The event, which consists of all the Cape and Islands league teams, gets its name because it consists of races that wouldn’t normally be in a dual meet, for example , a mixed relay and a 200-meter butterfly relay.

“It’s a fun way to kick off the season, ” Coach Passafiume said. “It mixes it up a little bit. ”

The regular season begins against Nantucket at home on Dec. 17,

Back in the school gymnasium, the boys and girls basketball teams are also prepping for the start of their seasons. After losing to Bishop Stang in the playoffs last year, the boys team has a lot of returning players as well as some new rising juniors joining the crew. Head coach Mike Joyce said last year’s playoff exposure was positive and can be built on going into this season.

“It was a good experience for that kids, ” Coach Joyce said. “We were very young last year with only two seniors. So it has been good for them to get that experience. ”

So far this year the head coach said the boys are already farther along than last year, thanks to their familiarity with offensive concepts and defensive strategy.

“The majority of them have played in the system already with me so we knew where we were going once we got started… It’s a good team, they’ve been working really hard, ” he said.

The particular boys first game from the season is at home against Falmouth on Tuesday. Tipoff is set for 4: 30 p. m.

The girls golf ball team also begins their season Tuesday against Falmouth but they will be across the Sound and beginning at 5 p. m. Melissa Braillard, who is entering her second period as the girls head trainer, said the first week of practice has been very encouraging as six returning upper classmen including senior captains Josie Welch and CJ Walsh ready to lead the particular team.

“It was really great and very positive, all the girls are working hard with excellent attitudes towards the season, which is exciting, ” Coach Braillard said.

With a schedule consisting of almost entirely Cape schools, the girls’ home opener won’t come until Dec. 21 against St . John Paul II School. Right after facing the Clippers Tuesday, they play Nauset and then Sturgis West before returning to their home crowd. Tuesday will also bring about the first indoor track action of the season as the Vineyarders look to build on an effective cross country season beginning with the dual meet against Sandwich on the Cape.

The state finalists will look to continue to build on their success along with the rest of their own Vineyard teammates as they compete in individual distance races, sprints, relays, hurdles, shot put, long and high jump.